Out of all the scaled, furry or feathery friends that call Madagascar their home, there is none as well-known and loved as the Lemur.

Despite the slightly crazed look of these creatures, they are known to be quite gentle and truth be told, pretty lazy. While venturing around the tropical island of Madagascar, you might just spot one of the 103 living species of Lemur lying slack across a warm rock or hanging expertly from a tree.

Due to their odd body shape – long, lanky limbs and over sized eyes – it may be hard to relate Lemurs to any other animal. Well get ready for some surprising and humbling news; one of the Lemurs closest relations is actually the human.

Yes, let that sink in, the only differences between you and these noble beasts of Madagascar are a few changes in our basic genetic code. Though that is no excuse to start swinging through the treetops or become lazier because, despite the fact that Lemurs are indeed primates, they split lineage from humans thousands of years ago. 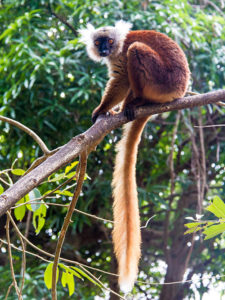 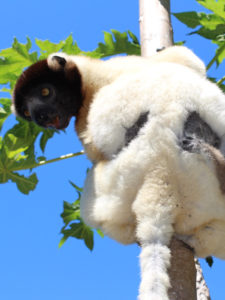 The Lemur is completely native to Madagascar, which sort of makes it VIP of Madagascar. Or should I say, VIL? This isn’t some crazy coincidence but is actually largely due to their isolation.

Around 160 million years ago, the piece of land known as Madagascar broke away from the African segment of the supercontinent, Gondwanaland. While primates around the rest of the world continued to evolve and adapt to new environments, those on Madagascar remained relatively unchanged.

These evolved primates, such as monkeys and apes, eventually drove the global lemur population to extinction. Except for those in Madagascar, who continued to thrive due to their bountiful food resources and limited competition.

Though you may spot one locked in a local zoo, there is nothing like seeing a lemur in its natural habitat. From the slow songs, they sing to each other, to their huge variety of colours and sizes, these unique creatures never seem to amaze.