L’heure Bleue is the epitome of luxury accommodations on the Island of Nosy Be. It has won several awards for its eco-construction, As the architects and designers took great care in damaging as little of the flourishing environment as possible.

The result? An unmatched Nosy Be Accommodation. L’heure Bleue doesn’t stick out like a sore thumb. This isn’t some over the populated resort that cuts through the natural landscape, but rather a rustically styled masterpiece that blends with the vegetation that hugs it from all sides.

Nosy Be Island is known to be the ultimate tropical holiday destination. It has all the activities the mainland has to offer – Scuba Diving, Snorkelling, Yacht Chartering, Hiking – if you can think of a fun holiday activity that ends in “ing”, chances are you can do it at Nosy Be.

Nosy Be also gives you that added seclusion. No overcrowded beaches and lodging, Nosy Be costs a little extra, but this is your vacation. When else are you going to have this experience? When it comes down to saving money or gaining priceless memories, the choice comes down to what you value most. 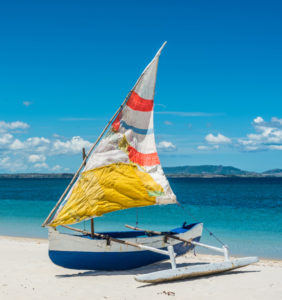 L’heure Bleue consists of eight luxury lodges and ten waterfront bungalows. The interior was expertly by fashion designer Frederique Glainereau. All of the furniture was by crafted in Madagascar with local materials such as rosewood and coconut leaf ravenala, giving the lodge that extra touch of authentic Madagascar. The Lodges are larger than the bungalows and do possess more luxuries such as Wi-Fi and picturesque views, but the bungalows put you right on the water’s edge. You have a private terrace overlooking the crystal-clear, warm waters.

L’heure Bleue is also located on the shores of the best beach in Nosy Be, and that’s seriously saying something.

Not often do you find an accommodation which is worthy of its surroundings, but L’heure Bleue truly captures the essence of natural Madagascar.